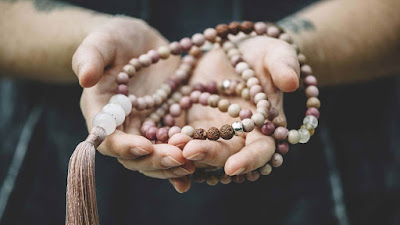 Decrees, similar to mantras, are yet another form of verbal prayer; however, decrees differ because of the added element of visualization, the spoken word, and the spiritual stillness of meditation. Some claim that decrees are one of the most powerful forms of prayer because they unite four chakras: prayer (Heart Chakra); spoken word (throat chakra); visualization (third eye chakra); meditation (crown chakra).
Violet Flame decrees are used worldwide by thousands of Ascended Master students. They can be spoken individually or used in groups to generate the benefic qualities of the Violet Ray: mercy, compassion, and forgiveness. One of my favorites is the simple Violet Fire decree by Mark Prophet, “I AM a being of Violet Fire! I AM the purity God desires!”
Decrees or mantras are often said rhythmically, in groups of seven, or in rounds of 108—the traditional Mala. [Note: A Mala is a prayer or rosary bead typically used in Hinduism and Buddhism, and a full Mala contains 108 beads with one final large bead often referred to as the guru bead.] Decrees and mantras are also repeated silently in the mind, similar to prayer, in preparation for meditation. El Morya lends further insight: “… it is when this (decree) is consciously applied by the chela, through the work of the Violet Flame, or other mantra work they may engage … light is then bonded to sound. Ultimately, this is the intertwining of consciousness with action.” Simply stated, sound activates light, and light and sound together command the Ray into a force of conscious activity.
-from Light of Awakening by Lori Toye