Alchemy and the Violet Flame 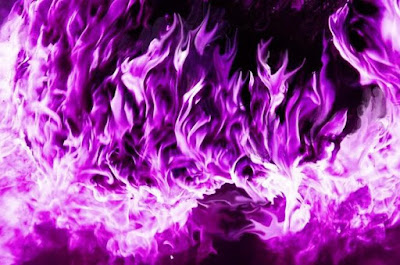 The Violet Flame benefits humans and divinities equally. During spiritual visualizations, meditations, prayers, decrees, and mantras, many disciples seek the Violet Flame for serenity and wisdom. Meanwhile, the Ascended Masters always use it in inner retreats—even Saint Germain taps into its power to perfect and apply its force with chelas and students
The Violet Flame, rooted in Alchemic powers, is sometimes identified as a higher energy of Saturn and the Blue Ray, a force leavened with justice, love, and wisdom. Ascended-Master lore explains the Violet Flame’s ability to release a person from temporal concerns: Saturn’s detachment from emotions and low-lying energies sever worldly connections. That’s why the scientific properties of violet light are so important in metaphysical terms. The shortness of its wavelength and the high Vibration of its frequency induce a point of transition to the next octave of light and into a keener consciousness.
While its primary focus balances negative personal and planetary Karmas, Saint Germain says, “If you are having trouble utilizing that law, it is as simple as taking a few seconds and visualizing that Violet Flame streaming forth from your feet and extending to the top of your head. You’ll feel it first as an electrical shock throughout your system, as it stimulates each of the centers of light upon the physical body. This is the assistance and the gift from the Lords of Venus so you would someday understand the ONE that is contained within each and every one of you.”
from The Golden City Series