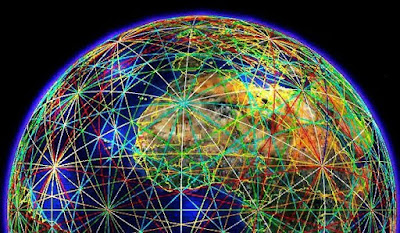 Ivan T. Sanderson, an early-century Scottish naturalist, first postulated the existence of an earth grid. He discussed a network of twelve, evenly spaced global Vortices, such as the Bermuda Triangle and the Oregon Vortex, which exist near the tropics of Capricorn and Cancer, and the North and South Poles. Here, enigmatic episodes—warped time and space, unexplained disappearances, mechanical malfunctions, and peculiar weather conditions—are the norm.
In the early 1970s, three Muscovite scientists—Nikolai Goncharov, Vyacheslav Morozov, and Valery Makarov—advanced Sanderson’s findings. Published in the Soviet science journal, Khimiya i Zhizn, their article “Is the Earth a Large Crystal?” described the planet as a “matrix of cosmic energy.” According to Russians, earth is a complex life form—a giant sphere of crystal that exhibits crystal-like properties. Images from space lend credence to this theory. Researchers discovered a mosaic of crystalline structures underneath the earth’s surface. These grid-like delineations follow fault lines, UFO sightings, and the boundaries of tectonic plates, the centers of ancient civilizations, and the migratory paths of animals.
The trio found distinct, faceted patterns: a series of seven crystalline structures comprising the five Platonic solids and two biologically important crystals, rhombic triacontahedron and rhombic dodecahedron. Each face of the crystal produces a grid map, yielding different results and phenomena.
But the secrets of the earth’s true makeup reach far beyond present-day theory. Ancient cultures realized our planet’s role as a sphere and as a group of crystals. A creation story of the Sioux describes the powers of the earth elements: “In the beginning, all was hoops within hoops, within hoops. These hoops were orbital paths: earth around the sun, the sun’s around the center of the Milky Way, and the electron’s around the nucleus. Everything at every scale had the same essential spherical shape and orbital path.” The conclusion of this Siouan narrative asks humanity to embrace the sixteen hoops, composed of the fifteen edges of earth’s crystal group and the sixteenth orbital path.
The Golden City Grid is actually a mathematical equation based on one additional hoop: this creates sixteen facets on the crystal; the seventeenth forms the final orbital hoop. The number seventeen is noteworthy in other historical and theosophical applications, too.
Linked to the Star of the Magi and the birth of the Christ Consciousness, seventeen is a hallmark of ancient Chaldean numerology. This culture believes it is the eight-pointed Star of Venus—an image of love, peace, and immortality. The numerical value of seventeen also shows up in divination practices: the Tarot Star, according to tradition, symbolizes the divine power of nature.
by Lori Toye from Points of Perception