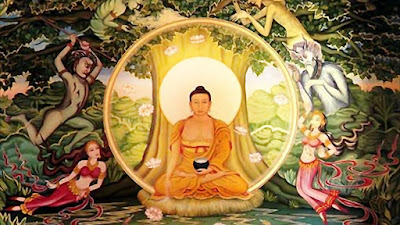 Known as the Buddha Body or the Field of Awakening, this energy body is initially three to four feet from the human body. It begins by developing two visible grid-like spheres of light that form in the front and in the back of the Human Aura. The front sphere is located three to four feet in front of and between the Heart and Solar Plexus Chakras. The back sphere is located in front of and between the Will-to-Love and Solar Will Chakras. These spheres activate an ovoid of light that surrounds the entire human body; an energy field associated with harmonizing and perfecting the Ascension Process. This is the first step toward Mastery. Once developed and sustained, this energy body grants physical longevity and is associated with immortality. It is known as the first level of co-creation, and is developed through control of the diet and disciplined breath techniques. Once this light body reaches full development, the spheres dissipate and dissolve into a refined energy field, resembling a metallic armor. The mature Eighth Light Body then contracts and condenses, to reside within several inches of the physical body where it emits a silver-blue sheen.
from Fields of Light by Lori Toye