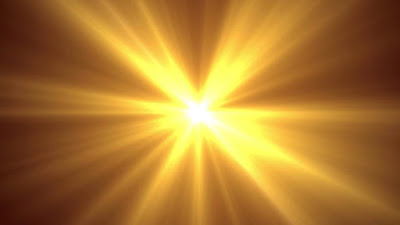 The Gold Ray in classic astrology and teachings on the Rays is often identified with our Solar Sun, an archetype of the Divine Father, and associated with leadership, courage, independence, authority, and justice. In fundamental Ascended Master teachings, the Gold Ray is often paired with the Ruby Ray, and this celestial partnership refines the energies of Mars (the Ruby Ray) from its base energies of war and aggression into passion, skill, determination, and duty. In later teachings on the Rays, the Gold Ray is also coupled with the Aquamarine Ray (Neptune), as a moderator of this Ray’s association with illusion and fantasy, evolving the blue-green Ray’s mysticism into perception, self-realization, transparency, and spiritual Unity. The Gold Ray is also associated with the Great Central Sun, the Solar Logos; our Solar Sun is a step-down transformer of its energies. According to the Master Teachers, the Gold Ray is the epitome of change for the New Times. The Gold Ray is the ultimate authority of Cosmic Law and carries both our personal and worldwide Karma and Dharma (purpose). Its presence is designed to instigate responsible spiritual growth and planetary evolution for humanity’s aspirations and the development of the HU-man. The Gold Ray, however, is also associated with Karmic justice and will instigate change: constructive and destructive. The extent of catastrophe or transformation is contingent on humanity’s personal and collective spiritual growth and evolutionary process as we progress into the New Times.
from Light of Awakening