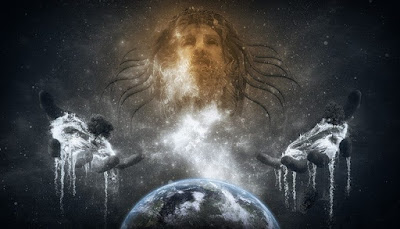 Ascended Master creation myths place the origination of the human soul from the heart of the Sun God-Goddess who constructs at the end of a Ray the Three-Fold (Unfed) Flame. This generates a Divine Presence, or a God-Flame; a Co-creator with the Source, the Cosmic I AM Presence. According to esoteric historians, some God-Flames choose to remain in the eternal embrace of the loving aura of the parental sun; those who choose to progress further project their spiritual essence into two Rays—Twin Rays. The Twin Rays develop a new light substance: an electrical light field which separates the Rays into two distinct individuals. The I AM—the individualized presence of God—dwells within the newly formed soul, and the electrical field of light is known as the I AM Presence.
The Presence of the I AM on earth forms the nexus of evolution in the Creative, or Human Hierarchy. The Electronic Body of light is formed of both the Causal and Astral Bodies. The Causal Body is known primarily as a mental plane, and many Ascended Masters reside in the higher levels of the Causal Plane during their service to humanity and earth. In Theosophical texts, the Causal body is known as the Karanopadhi, and its lower manifestation is associated with the causes bringing about re-embodiment on the Earth Plane; however, the Causal Plane is also associated with the Buddhi (Sanskrit for intellect) and the enlightenment of pure consciousness through discrimination between material and spiritual reality. It is also the location of both the abstract and rational mind. The Astral Body or Astral Plane has various levels of evolution and is the heavenly abode where the soul resides after the disintegration of the physical body. Within the Astral Plane lie our individual desires and salvation from their incessant demands—the Christ. This plane of emotional energy becomes the proverbial heaven or hell.
The Ascended Master who is free from incarnating on earth directs the Unfed Flame within the heart and builds a new etheric body focused through the immortal spiritual fire and light. Hence, the unascended are directed by the emotional desires of the Astral Body, symbolized by the earthly element of water. The Ascended Master has dissipated encumbering desires into a living flame; human desire is composed of etheric wandering. The human body is flesh; the Ascended Master is a body of spiritual fire— light. The luminous body of spiritual fire is developed through the use of the Unfed Flame in the physical plane.
Elohim focus their etheric Flame of Consciousness into the pineal gland of the human. This creates the Intellectual Consciousness. An outgrowth of the individual consciousness as thought, feeling, and action is the development of Mass Consciousness. Mass Consciousness is often measured by two methods: Collective Consciousness, the total consciousness of all forms of life currently present on earth; and the Group Mind. Societal and cultural beliefs are the creators of the Group Mind’s collection of thoughts, feelings, and actions.
from Divine Destiny by Lori Toye