The Western Shamballa Tradition: Part One 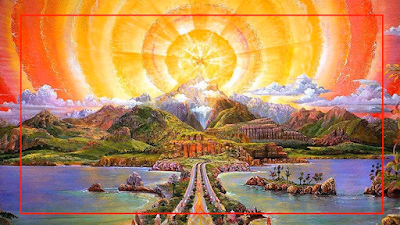 Shamballa, which means to make sacred, is the earth’s first Golden City. The notion of Shamballa represents peace, happiness, and tranquility. It’s a place of spiritual cleanliness and divine dominion; it’s the ethereal home and sanctuary of Sanat Kumara. To understand Shamballa’s metaphysical antiquity is to grasp its complex timeline. According to modern occult literature, this mystic metropolis existed more than 60,000 years ago. Other sources suggest that Sanat Kumara’s legion of volunteers descended to earth millions of years ago to build and inhabit the first incarnation of Shamballa. Over its long and calamitous history, the White City experienced a series of cataclysmic Earth Changes that destroyed it three times during sensitive alignments with the Galactic Light of the Great Central Sun. This cosmic susceptibility occurs when the progression of yugas (periods of Vedic timekeeping) move from one age of light to another. Sanat Kumara’s followers rebuilt Shamballa twice; the third time the White City ascended beyond the physical realm where it now exists in etheric perpetuity. This is the thirty-sixth Golden City Vortex of Gobi, known today as the City of Balance. It is located in China over the Qilian Shan Mountains next to the Gobi Desert.
This City of White served a specific purpose: to save the earth and humanity from certain annihilation. Stories like this in the Bible abound. Man’s faith falters; his connection with God dims; and moral, physical, and spiritual depravity prevail—as was the state of the earth before the Time of Shamballa. In a theosophical sense, universal principles demand a certain level of spiritual enlightenment for an entity to exist. The earth and its inhabitants, however, consistently fell short; so a cosmic council of divine luminaries, including Sanat Kumara, voted to destroy the unfit planet.
But the compassionate Venusian Lord wouldn’t allow earth to fall into oblivion. Instead, he offered his light to balance the planet’s metaphysical darkness and disharmony. As word spread of the Master’s plans, devotees—144,000 of them—volunteered to accompany their guru on his Karmic Mission. One hundred of Sanat Kumara’s stalwarts arrived on earth 900 years beforehand to proliferate light; propagate the Flame of Consciousness; and prepare for the coming of Shamballa.
But, Sanat Kumara’s volunteers paid a heavy spiritual price: Karma. No longer would their Venusian souls enjoy the fruits of constant consciousness. Instead, as terrestrial bodies bound to the wheel of embodiment, they would follow the Laws of Earth—death, birth, and the passing of forgotten lifetimes—as their incarnating light energy lifted the consciousness of earth.
Esoteric teachings say fellow Venusian Serapis Bey served as Sanat Kumara’s first volunteer. With an affinity for architecture, this Master Teacher—along with the Seraphic Hosts he served with on the planets of Mercury, Aquaria, and Uranus—offered to oversee the creation of Shamballa. Serapis Bey, the exalted being of light, performed one of the greatest sacrifices in Ascended Master legend by descending—as the light of heavens dimmed—into a physical body. On earth, with his legions of seraphim, Serapis Bey oversaw the building of the White City for nine centuries. His sacrifice awarded him the honor of the Divine Architect of Shamballa. This legend is analogous to the Hindu deity Tvashtri, later known as VishvaKarma, the celestial architect credited with the designing of the Universe and its contents. VishvaKarma represents the power of regeneration and longevity. Serapis Bey later incarnated as Phidias, the great designer of the Parthenon, the classical sculptor of the Statue of Zeus, and the architect of the Temple of the Goddess Athena.
-from Points of Perception, by Lori Toye