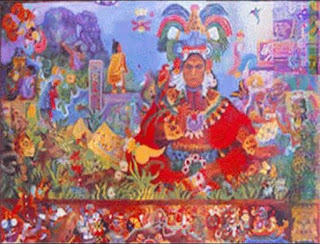 Some accounts of Ascended Master teachings claim this Ascended Master is the blond and blue-eyed avatar who appeared in 15,000 BC to Atlanteans to warn of imminent Earth Changes. The myth alleges no one listened, and his radiant crystal sphere of light disappeared and five years later the continent—known as Meru, rolled to the East. The Atlantean culture led by Casimir Poseidon was forever submerged in cataclysmic ocean waters, and its once glorious history diluted to legend and myth. In other esoteric teachings, the image of Lord Meru morphs into the great Native American teacher Lord Macaw; his symbol is the parrot, a representation of beauty, wisdom, and spiritual knowledge. The parrot is said to be the teacher of the birds of the Himalayans, and the White Parrot—also known as the Filial Parrot— hovers to the Bodhisattva Kuan Yin’s right side as a symbol of ancestral respect. Lord Macaw’s dark skin is contrasted by a colorful headdress filled with parrot, trogon, and quetzal bird feathers, a symbol of Quetzalcoatl—the Christ Consciousness.
Also known as the Great Sage of Ancient Mu—Ameru, Lord Meru was the Keeper of the Scrolls in Lemuria’s final days. Esoteric historians claim the destruction of Mu began before 30,000 BC and continued for thousands of years. The final termination of the great civilization of the Pacific occurred between 9,000 and 12,000 BC, prior to the destruction of Poseidonis—the remaining lands of Atlantis. The Spiritual Hierarchy entrusted Lord Meru and his partner and high priestess Amara-Mara, known as the Goddess Meru with scientific and spiritual records associated with the Right Hand Path and the Temple of Divine Light along with its venerated symbol and spiritual device: the Golden Disk of the Sun. Before the final cataclysms of Lemuria, it is claimed the pair traveled to Ancient South America in a “silver-needed airship” and safely re-established the sacred disk and the Brotherhood of the Seven Rays on the shores of the newly formed Lago Titicaca—Lake Titicaca.
Ascended Master myth claims Lord Meru spent many years as a spiritual ascetic wandering the new lands of South America, and he later joined forces with immigrants from the devastated lands. Through the use of the light forces concentrated within the Golden Disk, they cut blocks of stone to construct new buildings which became libraries and temples of Lemurian science, culture, spirituality, and esoteric knowledge. It is claimed these structures still exist to this day, and the ancient sanctuary of the Brotherhood of the Seven Rays is carefully guarded by the Great White Brotherhood.
Lord Meru’s spiritual initiation began in the capital city of Lemuria, known as the Lands of Rama, now present-day Sri Lanka. The Lands of Rama are also known as the ancient empire of India which thrived until 10,000 to 15,000 BC. The radiant energies of the once antediluvian temples of the city generate the etheric Mount Meru—acclaimed in both Hindu and Buddhist cosmology as the center of earth’s spiritual and metaphysical universes—home of the Devas. The spiritual mountain is said to be four to nine miles high, shaped like an hourglass, and guarded by the Four Great Kings of the Earth: the four directions. Before Lemuria’s geological demise, Lord Meru’s brother, Lord Himalaya, also immigrated from the Lemurian capital to the present-day Pamir Mountains, northeast of Kashmir, and established the Retreat of the Blue Lotus.
The two spiritual refuges of Lemuria founded by two brothers deeply influenced the post-Atlantis’ New World spirituality. Lord Himalaya’s Retreat of the Blue Lotus radiated spiritual energy to the Eastern culture of Sumera—Ancient Mesopotamia, India, and China. Lord Meru’s Brotherhood of the Seven Rays impacted spiritual growth in the West and the lands of Ameru—now known as America. In the New Times the Ascended Masters state the island of Sri Lanka, the once Lemurian sanctuary of Lord Meru and Lord Himalaya, will be known as the Holy Island. Today Lord Meru, Lord Himalaya, and the Goddess Meru each steward these Golden Cities—respectively, the Golden City of Gobi, which step-downs the energies of Shamballa into the entire Golden City Network; the Golden City of Adjatal located near the Retreat of the Blue Lotus, whose name means the Big Rainbow, (Adjatal is a tribute to the ancient Brotherhood of the Seven Rays); and the Golden City of Andeo, located in present-day Peru, which radiates much needed Feminine energies throughout the New Times to assist the incoming souls known as the Seventh Manu.
From Divine Destiny by Lori Toye