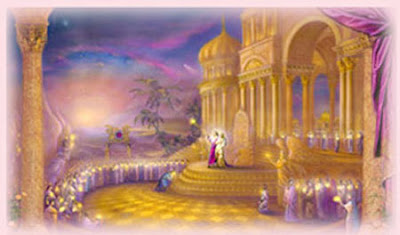 The builders of Shamballa modeled it after the opulent Venusian City of the Kumaras. On a white island in the sapphire-colored Gobi Sea (present-day Gobi Desert), workers erected the Elysian metropolis of light and consciousness. An ornate bridge of marble and Gold connected the White Island to the mainland. They adorned the city with hundreds of white, dome-and-spire-capped temples—that’s where Shamballa earned its moniker, the City of White. Against this whitewashed backdrop, the luminous Temples of the Seven Rays and their corresponding hues—blue, pink, yellow, pearl-white, green, ruby, and violet—stood prominently along a landscaped avenue. At its terminus rose the Temple of the Lord of the World, Sanat Kumara’s annular, Golden-domed sanctuary. Here, the Ascended Master; three other Venusian Kumaras (lords); and thirty high priests, also known as Lords of the Flame, held conscious light for earth to sustain her place in the solar system. During his time in Shamballa, Sanat Kumara provided more than a spiritual safe harbor for the earth’s denizens. He also formed the Great White Brotherhood—the fellowship of the Ascended Masters.
Thus, Shamballa defined itself as the earthly seat of selflessness. Divine beings, including the unascended, flocked there to volunteer their efforts and services. To elevate their consciousness, and prepare them for upcoming lifetimes and undertakings, Sanat Kumara magnetized their energies with his Divine Love. Others seeking the Master’s Heart Flame trained as messengers at Shamballa’s numerous temples. Many of these servants became initiates of the Great White Brotherhood.
During Shamballa’s physical existence on earth, ascended and unascended members of the Great White Brotherhood returned annually for sanctuary, retreat, rejuvenation, and instruction for the upcoming year. After the third destruction of the city, and Shamballa’s subsequent Ascension to the Fifth Dimension, ascended beings continued this tradition. But, without their aid, earthbound souls could no longer enter the City of White. To gain access, ascended members escorted the unascended to the etheric temples of the City of White by accelerating their light bodies during meditation and dreamtime. For now, Shamballa will continue to exist in the ether, but Sanat Kumara prophesies its return: “[It] shall remain there until it is lowered again, permanently, into the physical appearance world as the Golden Age proceeds and mankind, individually and collectively prove themselves worthy to sustain it for all eternity. It will be My Gift to the evolution that I have loved, and will remain a part of the Star of Freedom, long after I have returned to my home …”
Lori Toye, from Points of Perception