Nature Devas and the Elemental Kingdom 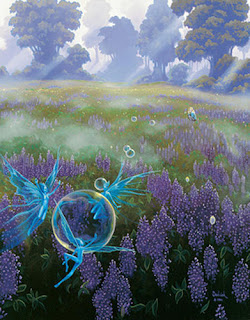 Deva, meaning shining one or being of light, is a Sanskrit word that describes a God, deity, or spirit. Helena Blavatsky, co-founder of the Theosophical Society, introduced these celestial beings, or angels, to the western world in the nineteenth century. She described them as progressed entities from previous incarnations that would remain dormant until humanity attained a higher level of spiritual consciousness. Devas represent moral values and work directly with nature kingdoms.
Elementals, on the other hand, are an invisible, subhuman group of creatures that act as counterparts to visible nature on terra firma. Medieval alchemist and occultist Paracelsus coined the term for these Elemental spirits. He divided them into the following four categories: gnomes (earth); undines (water); sylphs (air); and salamanders (fire).