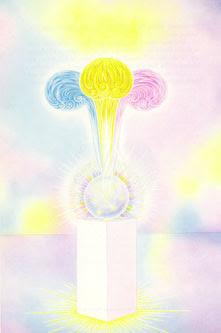 According to the Masters, this Unfed Flame is a Flame of Divinity and of spiritual consciousness.
The Masters refer to this phenomenon in other terms: the Threefold Flame, Monad, and Jiva. The Unfed Flame urges humanity to evolve beyond its present state of spiritual consciousness through Co-creative thought, feeling, and action. Relying upon a higher, spiritual consciousness, the Lords of Venus—servants of humanity and onetime denizens of the planet Venus—rooted Love, Wisdom, Power, and the Unfed Flame in the human heart.
These Divine Tenets empower humans to achieve a higher sense of consciousness, thereby assuring humanity a type of spiritual immortality.
The grafting of the sublime Unfed Flame to the carnal human heart occurred from afar.
Ancestral helpers on Venus directed a collective and everlasting energy force toward humanity on earth. The Venusian and ever-youthful lord named Sanat Kumara, the overseer of Shamballa, spearheaded this Mission. With an etheric Silver cord, he connected the Unfed
Flame to every life stream incarnation on earth. When this flame of spiritual consciousness began to develop among individuals, Sanat Kumara led a group of higher beings to earth where they established the first Golden City, later known as Shamballa. This spiritual center possessed unrivaled opulence; streets paved with Gold passed jewel-encrusted Temples and Schools of Higher Wisdom and Knowledge.
In addition to its metaphysical influence on the human body, the Unfed Flame serves as a portal to a being of greater spiritual consciousness—the I AM Presence—to which we are indelibly connected. Meanwhile, these legends appear in other doctrines. Vedic Cosmology—Hindu-based metaphysics—mirrors a similar creation story. According to the sacred Sanskrit text of Hindu philosophy, the Bhagavad-Gita, fourteen planetary systems exist in the intangible universe.
The highest is Satyaloka where residents grasp advanced spiritual knowledge. Sanat Kumara and Sananda—who in Vedic culture is referred to as Sanandana Kumara—are two of the four sons of Brahma and inhabit in the second-tier planetary system of Tapaloka. Earth, known as Bhurloka, falls seventh in line.
Each planetary system creates a unique experience for its dwellers—the sentience of the space-time continuum and the manifestation of the physical being differentiate higher from lower beings. Residents of enlightened strata perceive time durations in millennia, have no sense of fear, and do not confront disease or the aging of the body. In the lower planetary systems, residents experience shorter life spans, marked fear, widespread disease, and increased apprehension. - Lori Toye from Points of Perception