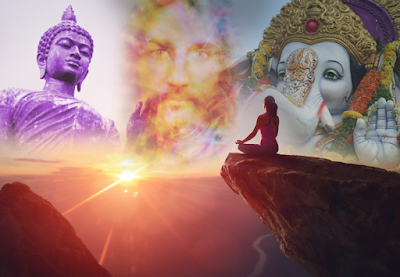 An Ascended Master is a highly developed spiritual being who has ascended the human physical manifestation beyond the Third Dimension. At one time the members of this cosmically elite fellowship, known as the Great White Lodge or Brotherhood, were men and women tied to a corporeal existence like any other human on earth.
But a higher destiny set these souls apart from ordinary individuals. Over thousands of years, these souls encountered innumerable diverse lifetimes and an arduous yet prolific process of incarnation after incarnation. This boundless experience of trials, tragedy, knowledge, and wisdom culminated in an uncanny spiritual maturity beyond that of a normal human being. They came to understand and acknowledge in their hearts, an undeniable, great truth—divinity. The recognition of this inherent divinity drives human consciousness beyond Third Dimensional perception; it instigates the Mastery of thought, feeling, action, and experience.
A command of the Third Dimension breaks the elusive bond to the Wheel of Karma, freeing the Spiritual Master from the need to reincarnate in an earthbound physical body. Now the individual has attained the role of Ascended Master who dedicates his or her immortal existence to the universal spiritual enrichment of humanity. Many members of this fellowship, though not physically tied to earth, remain close to terra firma and its people. Master Teachers seek others, who, although embody a physical attachment to earth, embrace an innate desire to evolve beyond the Third Dimension.
The Great White Brotherhood or Lodge earns its name from an all-encompassing philosophy of humanity. White refers to white light, which embraces all colors, races, creeds, and genders. The Brotherhood’s primary goal focuses on the preservation of the teachings and the spirit of the ancient religions and philosophies of the world. They pledge to protect mankind from growth-inhibiting assaults on individual and group freedoms, self-knowledge, and personal choice. Of paramount importance is their Mission to reawaken the dormant ethical and spiritual spark that is fast disappearing among the masses. - from Points of Perception