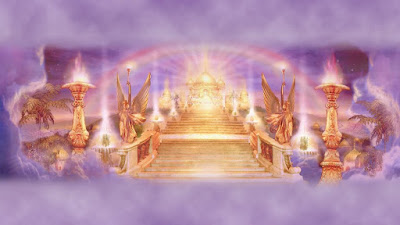 The Solar Hierarchy encompasses the Elohim and the Archangels. The Elohim (magnetism) are known as the Universal Builders and with the Archangels (radiation)—the Master conductors of the Rays—jointly formed a Creation Grid. At a central juncture of the grid the center of the earth was created through the appearance of the Unfed Flame. To this day, the Unfed Flame is claimed to exist in the center of the earth, and forms the cohesive power for the electrons and atoms of the Four Elements of the earth. Through the direction of the Rays, the Elohim managed the Four Elements (Virgo, Neptune, Aries, and Helios), the Gods of Mountains and Seas, and Amaryllis—the Goddess of Spring. The Devas created mountains, rivers, valleys, prairies, and lakes.
It is claimed that the Ascended Beings Virgo and Pelleur oversaw the creation of the earth element to hold water, and from this substance the human form was ultimately created. The Solar Manu—a Cosmic Being—holds the creative authority to sponsor a generation of incoming lifestreams (approximately 2,000 to 5,000 years). The office of Manu oversees humanity’s spiritual evolutionary process throughout various epochs by protecting the current, incoming race. Two Manus protect incarnating souls; the Solar Manu protects the generations of souls incarnating throughout our Solar System, and the Planetary Manu protects souls incarnating on earth. In the New Times it is prophesied that Mother Mary occupies the earthly post as guardian of the Seventh Manu—highly-evolved souls currently incarnating on earth.
It is said that the gravity of the earth is held through a mystical Rod of Power, a symbol of the office of Lord of the World that is kept securely in the Golden City of Shamballa. The mysterious wand is said to be constructed of orichalcum—the ancient metal of Atlantis—and encrusted with diamonds on either end.
The history of Shamballa involves another important position in the earth’s Spiritual Hierarchy, the leader of the Great White Brotherhood: the World Teacher. Various Ascended Master teachings assert Jesus the Christ was the former resident of this appointment, and Lord Maitreya was the current World Teacher. The Golden Cities stream through the hierarchal radiance of Shamballa, and their importance for the planet and evolving humanity during the New Times has equal significance to the earthly hierarchal offices of the World Teacher and the Buddha.
On earth, the office of the Lord of the Seven Rays is claimed to be held by the Maha Chohan, who oversees the Chohans (Lords) of the activity of the Seven Rays on earth. The Lord of the Seven Rays is likely the archetypal Mithra. The Lords of the Seven Rays oversee vital Temples and Spiritual Retreats located in both etheric and physical locations on earth. These spiritual sanctuaries provide a focus for the activity of the Rays of Light and Sound on earth and shepherd humanity’s continued spiritual education and evolution through the Rays. The Maha Chohan—which means the Major Lord—is said to be surrounded by the white light of all the Rays.
-from Divine Destiny by Lori Toye