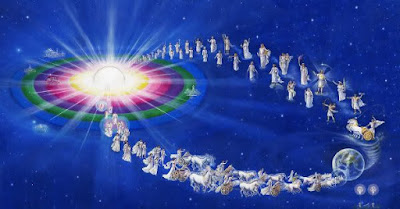 The term Spiritual Hierarchy often refers to the Great White Brotherhood and Sisterhood, however, this term also connotes the spiritual-social structure that exists within the organization, their members, and their various states of evolution. This includes the different offices and activities that serve the Cosmic, Solar, and Planetary Hierarchies. Esoteric historians claim the Spiritual Hierarchy embodies religious principles from Christianity, Hinduism, Buddhism, Neo-Theosophy, and Ascended Master Teachings.
However, to correctly understand the provenance of the Spiritual Hierarchy, it is essential to embrace its unique and concurrent Creation Story. The Ascended Masters’ chronicle of the mythological formation of our galaxy, our Solar System, and the earth offers significant insight and knowledge regarding the Spiritual Hierarchy.
According to the Ascended Master legend, the Silent Watcher embraces the Great Central Sun—the Galactic Center. This Cosmic Being is also known as the Galactic Architect who designed the galaxy along with its many Solar Systems. The Galactic Silent Watcher works in tandem with various Solar Silent Watchers who assist in the design of the individual Solar Systems within the galaxy. Scientists theorize that our sun is one of 200 billion stars in the Milky Way, and so far, astronomers have discovered approximately seventy Solar Systems in our galaxy. The Solar Systems of our galaxy are overseen by the Galactic Silent Watcher and the Galactic Council—comparable to a Galactic United Nations—which comprises many Ascended Cosmic Beings from a variety of solar and star systems, including: the Sirius System, the Pleiades Cluster, the Arcturus System, the Constellation of Centaurus, the Constellation of Pegasus, the Constellation of Hercules, the Constellation of Volans, the Constellation of Aquila, the Orion System, and representatives from the neighboring DAL or DAHL Universe. At the time of this writing, scientific research discovered that the earth may in fact originate from another galaxy: the Sagittarius Dwarf Universe. Researchers surveying the sky with infrared light at the University of Massachusetts mapped a New Star Map, through the use of a supercomputer to sort out a half-billion stars. Through the study of star debris and by pinpointing the exact location of our Solar System—at the crossroads where two galaxies join—they discovered that the Milky Way Galaxy is absorbing smaller galaxies. The Sagittarius Dwarf Universe was discovered by a British team of astronomers in 1994, and in 2003 the Massachusetts team altered their angle of telescopic view to find the earth in perfect alignment with the smaller galaxy, or what was left of it. Researcher Martin Weinberg believes this process is two-billion years in the making: “After slow, continuous gnawing by the Milky Way, Sagittarius has been whittled down to the point that it cannot hold itself together much longer … we are seeing Sagittarius at the very end of its life as an intact system.”
Metaphysicians theorize the discovery of the new galaxy may be the basis for the ending of the Mayan Calendar, because the Pleiades Star Cluster—which the calendar is based upon—is no longer a reliable point for celestial navigation as the earth and its Solar System veer into a new direction.
from Divine Destiny, by Lori Toye