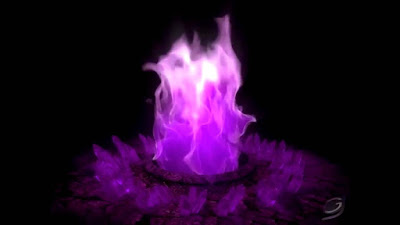 The spiritual ideal that through giving selflessly, or taking a short-term loss, there is a greater long-term return for others created. The Hindu spiritual ceremony known as both puja and yagna is founded from this principle.
The ceremony is known as a form of “bloodless sacrifice” which is offered to appease certain Gods or planetary afflictions to change the course of events.
Allegedly the Violet Flame gained its momentum through the great avatars who sacrificed their human frailties through burning them ceremonially with a mental visualization of the Violet Fire. The sacrifice of duality inevitably creates unity, or entrance into Unity Consciousness, and our world is purified and made whole again. Joseph Campbell explains the spiritual concept of sacrifice and bliss:
“Out of the rocks of fallen wood and leaves, fresh sprouts arise from which the lesson appears to have been that from death springs life, and out of death new birth. And the grim conclusion drawn was that the way to increase life is to increase death. Accordingly, the entire equatorial belt of this globe has been characterized by a frenzy of sacrifice—vegetable, animal, and human sacrifice.”
Through the Violet Flame, the rituals of sacrifice evolved to a level of consciousness, where the old patterns and paradigms of thoughts and feelings are offered to the sacred fire to initiate a new way, led through the process of transmutation into transcendence.
From: Sacred Energies of the Golden Cities