The Celebration of Shamballa 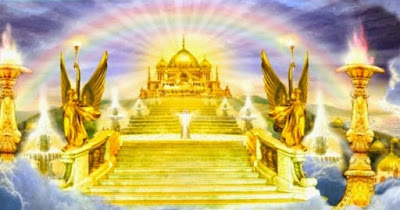 Over four weeks (twenty-eight days), esoteric followers, including Ascended Masters, honor the Celebration of the Four Elements during the Shamballa festivities. It begins December 17—accompanied by lighting of the Eternal Flame Candle, or the Fireless Light—on the altar of the main temple. This etheric celebration is divided into the following four parts:
1. Week One: December 18 to December 24. Element: Earth. The celebration and thanksgiving offered to Mother Earth. Ceremonies and rituals for Earth Healing are held at Shamballa during this time. Bowls of salt, which represent earth united with spirit, are placed on all the altars in the Temples of Shamballa.
2. Week Two: December 25 to December 31. Element: Air. Celebrations of gratitude and thanksgiving to the World Teachers and the messengers of the Great White Brotherhood who have selflessly served humanity are held this week. Krishna, Jesus Christ, Buddha, and other well-known avatars and saviors are also lauded. Doves of Peace are symbolically released this week.
3. Week Three: January 1 to January 7: Element: Water. A thanksgiving for our Soul Families is held during this week. This phase of Shamballa Celebration is about revering love and friendship, and performing Cup Ceremonies. A Cup Ceremony is a water ceremony that celebrates the union of Mother Earth and Soul Families. A Cup of water is passed and infused with the prayers of the devoted. The prayer charged water is then poured on the earth.
4. Week Four: January 8 to January 14: Element: Fire. This week is a celebration of Spiritual Fire. This time is set aside for personal purification, intentions, reflection, and meditation for the upcoming year. This is an important period for the Brotherhoods and Sisterhoods of Light to review plans for the following 365 days. Candles for each of the Seven Rays, representing the seven Hermetic Laws, are lit this week.
5. The Sealing of Divinity: January 15 and 16: Celebrations of Unity—Unana—and the ONE.
6. The Closing of Shamballa: January 17: the light of the Eternal Flame returns to Venus.
From Points of Perception by Lori Toye