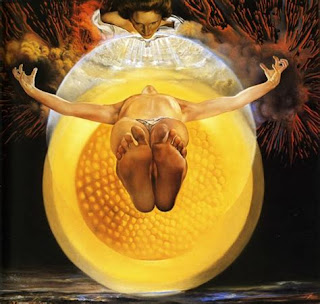 The Ascension Process, according to Saint Germain, gathers the energies of the individual chakras and expands their energy through the heart. The Law of Love calibrates the energy fields (aura) to Zero Point—a physical and philosophical viewpoint of neutrality. From there, the subtle and fine tuning of the light bodies is effectuated through the higher chakras, sequentially including the Throat Chakra, the Third Eye Chakra, and finally the Crown Chakra. Zero Point is key in this process and it is here that the energies of all past lives are brought to psychological and physical (karmic) balance. Then the initiate is able to withdraw their light bodies from the physical plane into the Astral Light of the Fourth Dimension. The Ascension Process may take several lifetimes to complete and the beginning stages are defined through the arduous process of obtaining self-knowledge, the acceptance of the conscious immortality of the soul, and the use of Alchemy through the Violet Flame. Intermediate stages may manifest the anomalies of Dimensional Acceleration, Vibrational Shifting, Cellular Awakening and Acceleration, and contact with the Fourth Dimension. Use of the Gold Ray at this level accelerates the liberation process and unites the individual with soul mates and their beloved Twin Ray. Later stages of Ascension include the transfiguration of light bodies and Fifth Dimensional contact through the super-senses as the magnificent Seamless Garment manifests its light. It is claimed that the Golden Cities assist the Ascension Process at every stage of development. According to the Master Teachers diet and fasting will also aid the Ascension Process at various phases.
From: Building the Seamless Garment, Revealing the Secret Teachings of Ascension and the Golden Cities