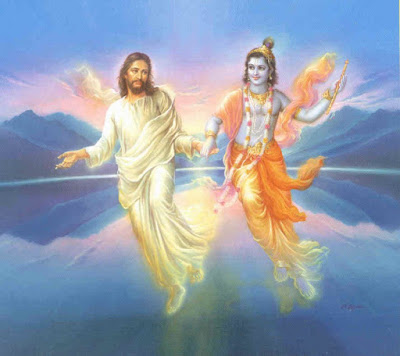 Hindu classifications of the stages of human spiritual advancement are well documented in the Upanishads. They are: Siddha, a perfected being; Jivanmukta, freed while living; Paramukta, supremely free with full power over death. A Paramukta or Ascended Being purposely creates a physical body and descends to earth to either assist humanity or to spiritually bless or balance a disordered world. This Divine Manifestation is known as an Avatar. The perfected, death-free body of an Avatar does not cast a shadow or leave footprints. Such Masters never appear in the gross public, and have the ability to become invisible. It is claimed Saint Germain will take the form of a beggar or an old woman dressed in a wisp of purple or violet clothing. Sananda states he is not limited by form of any kind, and will assume any form or appearance necessary for the task at hand.
According to the teachings of the Ascended Masters, twelve Spiritual Avatars are physically present on earth at any given time. This ensures specific levels of vibration, radiance, and spiritual energy to foster humanity’s growth and evolutionary requirements. Concurrently, another group of twelve Avatar Masters reside at the Fourth Dimension, and yet another series of twelve in the Fifth Dimension. Saint Germain explains that there are minor levels of consciousness between the Third and Fourth Dimensions; and minor levels between the Fourth and Fifth Dimension. Altogether, including the numerous minor levels, a total of 144 Avatars assist humanity’s evolutionary process on earth. A total of 108 Avatars exist on the minor, sub-planes between the Third, Fourth, and Fifth Dimensions. The number 108 is considered sacred in Vedic tradition.
Saint Germain claims that many of the Master Teachers are focusing their energies and teachings toward the awakening of two spiritual aspects of humanity. Their first goal is to awaken the innate Divinity and perfection of the HU-man through the activation of the Eight-Sided Cell of Perfection within the Chamber of the Heart. Secondly, use of the Seventh Chakra awakens the pineal gland (the Third-Eye) and opens the flow of the inner dialogue between the student and the I AM Presence. Saint Germain prophesies that the personal awakening of the Seventh Chakra promotes the collective development and opening of humanity’s heart. This enables mankind to enter a new dimension of spiritual awareness and understanding.
from Divine Destiny, by Lori Toye