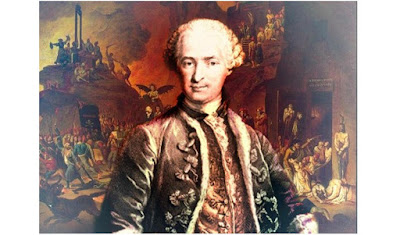 The Lord of the Seventh Ray and the Master of the Violet Flame, Saint Germain lived numerous noteworthy lifetimes, dating back thousands of years, before incarnating as the Comte de Saint Germain during Renaissance Europe. In his own Trance-Mission, Changing the Guard, he illustrates his life as the Englishman Sir Francis Bacon, the sixteenth-century philosopher, essayist, and Utopian who greatly influenced the philosophy of inductive science.
His most profound and well-known work on the restoration of humanity, the Instauratio Magna (Great Restoration), defined him as an icon of the Elizabethan era. Research also shows his co-authoring of many Shakespearean sonnets.
According to Esoteric historians, Queen Elizabeth I of England—The Virgin Queen—was his biological mother. Before Bacon’s birth, the queen married Earl of Leicester, quieting ideas of illegitimacy. Elizabeth’s lady in waiting, Lady Ann Bacon, wife of the Lord High Chancellor of England, adopted him following the stillbirth of her baby. Bacon was, therefore, the true heir to the crown and England’s rightful king.1 But his cousin James I of Scotland succeeded the throne. Sir Bacon described this turn of events in his book, Novum Organo, published in 1620: “It is an immense ocean that surrounds the island of Truth.” And Saint Germain often reminds us to this day “there are no mistakes, ever, ever, ever.” Bacon’s philosophies also helped define the principles of Free Masonry and democracy.
As an adept leader of the Rosicrucians (a secret society of that time), he set out to reveal the obsolescence and oppression of European monarchies.
Eventually, Bacon’s destiny morphed. He shed his physical form and sought the greatest gift of all: immortality. And that’s what placed him in the most extraordinary circumstances throughout history. Even his death (or lack of) evokes controversy. Some say Bacon faked his demise in 1626—the coffin contained the carcass of a dog.
According to the author, ADK Luk, Saint Germain ascended on May 1, 1684 in Transylvania at the Rakoczy mansion. He was 123 years old. Some say Saint Germain spent the lost years—from 1626 to 1684—in Tibet. During this time he took (or may have been given) the name Kajaeshra. Interpreted as God’s helper of life and wisdom, it was possibly a secret name and rarely used. Kaja has several interpretations: in Greek it means pure; Balinese, toward the mountain; early Latin (Estonian), echo; Hopi, wise child; Polish, of the Gods; and Hebrew, life. The second part of the name—Eshra (Ezra)—translates into help or aid. - from Points of Perception by Lori Toye