The Definition of a Ray 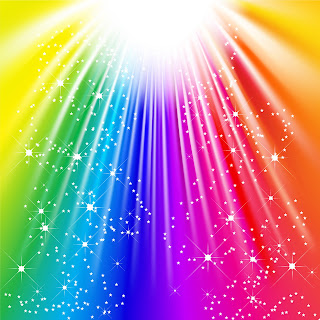 A Ray, simply stated, divides its efforts into two measurable and discernable powers: light and sound. Alice Bailey, author of many spiritual and esoteric works, wrote in A Treatise on the Seven Rays, “A Ray is but a name for a particular force or type of energy, with the emphasis upon the quality which that force exhibits, and not upon the form aspect which it creates. This is a true definition of a Ray.” Bailey’s work underscores the abstract elements of a Ray but omits its tangible importance. The presence of a Ray also creates many physical attributes, which are significant in Ascended Master teachings.
Light and sound are the building blocks of our universe; therefore, the Rays permeate everything in our world of thought, feeling, and action. A developed psychic may perceive the twin matrix powers of light and sound as specific colors and sound frequencies in the energy fields of an individual—the aura. Nature mimics a similar pattern: a plant blooms a variety of colorful flowers, a common mineral becomes a precious gem, a songbird’s melody is distinct and characteristic to its species. Each color and sound contains an undeniable unique vibration.
Light and sound evoke attributes and properties that carry specific cultural meaning as well. In the Western world, black is often associated with darkness and evil; it is the hue of mourning and death. Yet in some Native American traditions, black represents the Great Mystery and is linked to the cardinal direction north on the medicine wheel. Though white is traditional attire for a Western wedding, white is often worn at funerals in Eastern cultures. Sound is no exception to cultural identity. Western music reflects the spectral experience of human emotion; Eastern music mimics the sounds of nature and its tranquil effect on human consciousness.
A person’s culture will influence his or her experience of the Rays, creating a diverse spiritual interpretation. This cultural filter can cause misunderstandings, discrepancies, and confusion. That’s why the esoteric translation of the Rays is often lost to the novice.
From Light of Awakening